In 1921, the world was in a great period of transition. Most of Europe and the Americas were reeling from the aftermath of World War I, there was great political unrest, social upheaval, and waves of worker strikes. In the United States, Warren G. Harding was sworn in as the 29th president after campaigning on the promise to return to pre-war “normalcy” and a pro-business platform, a stance far different from that of his predecessor. It was the early days of prohibition and the roaring 20s - a time of stark contrasts between the struggles of the recent past, and looking towards a more modern future. This year saw the first radio broadcast of a baseball game, the opening of the grand Chicago Theater movie palace, as well as the first Miss America Pageant. Americans had started to get a glimpse of what the rest of the 20th century would look like -a period marked by both innovation and turmoil. It was within this year of change that we saw the last of the Morgan Silver Dollars, very much symbolic of the late 19th century - and the first Peace Silver Dollars, equally symbolic of the early 20th.

The Morgan Silver Dollar is one of, if not perhaps the most, iconic coins in American history. Watch any movie set in the Old West, and the Morgan Dollar will make an appearance - they lined the pockets of gunslingers and gamblers, lawmen and oil tycoons, as well as investors and bankers back East. The origin of the Morgan Dollar is rooted in this culture of expansion and industry, making it all the more representative of its time. By the early 1870s, the Comstock Lode in Nevada was producing a huge amount of silver. While there was not any public pressure for another silver dollar - the Seated-Liberty predecessor was not especially popular - those with interests in the silver industry lobbied in Congress, and won. Concerned about the potential for inflation, president Rutherford B. Hayes initially vetoed the bill. However his veto was overridden by Congress, and the Bland-Allison Act was passed in 1878. This new legislation required the Treasury to purchase between two and four million dollars' worth of silver per month, for the purpose of minting silver dollars. 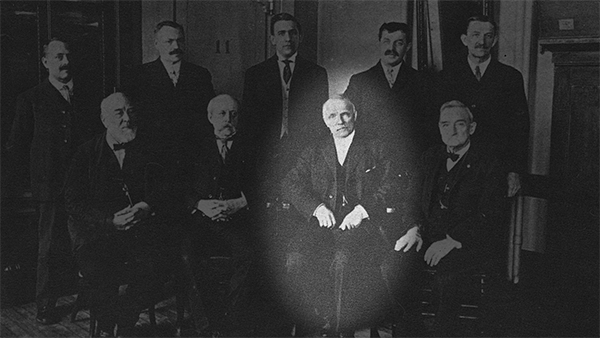 The new silver dollar coin would be designed by George Morgan, who came from London to the Philadelphia Mint in 1876 to work under Chief Engraver William Barber on a trial basis. Though he was technically only an Assistant Engraver, both he and Barber were tasked with creating a design for America’s new dollar. He wanted his version of Liberty to look more “American” and less like the more classical figures used previously, and so he modeled her after local Philadelphia school teacher, Anna Willess Williams. His approach was exactly what the Mint Director had been looking for, and this design ultimately won out against that of his superior William Barber. 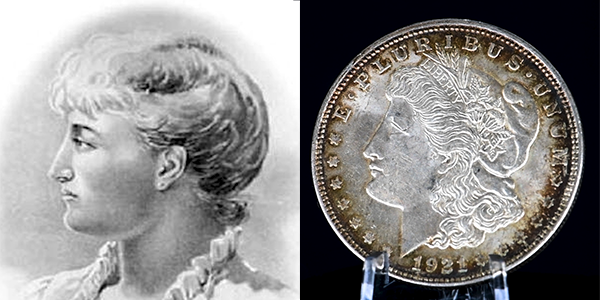 In 1890 the amount of silver required to be purchased by the Treasury each month increased to 4,500,000 troy oz. through the Sherman Silver Purchase Act - however just a few years later, a number of major industrial firms went bankrupt, causing the Financial Panic of 1893. President Grover Cleveland blamed the Sherman Silver Purchase Act, and called on Congress to repeal it - which it did. While Morgan Dollars continued to be minted, production ramped down. In 1898, Congress declared all remaining silver purchased under the SSPA was to be made into silver dollars which increased their production again until they ran out of bullion in 1904.


The Morgan Dollar would not be minted again until 1921 with the passing of the Pittman Act, which was intended to aid the British financially in WWI. This act permitted the melting of up to 350,000,000 silver dollars to be sold to Great Britain at the price of $1 per ounce, though the actual number of dollars melted was 270,232,722 - 259,121,554 of which were sold to the British. Additionally, acting to subsidize the American silver industry, the same amount of silver would be purchased from American mining companies at the same price of $1 per ounce for the purpose of minting more silver dollars. While Morgan Dollars were minted in all five historic mints - 1921 was the only year they were minted in Denver. As the Treasury had destroyed the original design dies in 1910, George Morgan had to recreate an entirely new one. These new dies would not be used for long though, as a new silver dollar meant to commemorate the end of World War I was to be produced the same year.

The Peace Silver Dollar is equally iconic in its own right, with its flapper-esque depiction of Liberty and its strong symbolism of peace after conflict, it could not be more representative of America in the 1920s and 30s. Much like the Morgan Dollar, the origin story of the Peace Dollar’s design is that of an immigrant underdog prevailing - the essence of the American Dream. 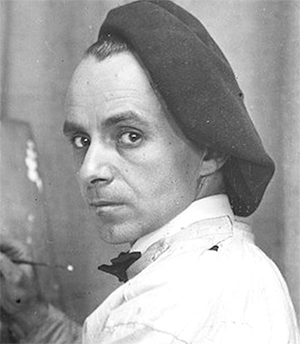 
In July of 1921, it was formally decided that there would be a design competition for the silver dollar that would replace the old Morgan model. For this new coin, artists were told to depict Liberty “as beautiful and full of character as possible” - and by December, Italian-American Anthony de Francisci’s design was unanimously selected. De Francisci did not have a great deal of experience prior to this - he was the youngest competitor, and his only prior work at the U.S. Mint was helping to create the final models for the 1920 Maine centennial commemorative half dollar. As the competition had a relatively short entry window, de Francisci used his wife Teresa as his model. It is no coincidence that the radiated crown depicted is reminiscent of the Statue of Liberty - as he and his wife were both immigrants, this powerful symbol was integral to his understanding of American identity and freedom.

The initial design however was not especially well received with the public. When it was announced in December of 1921, newspapers were quick to criticize the broken sword featured on the reverse - many thought it was representative of defeat. As the coin was meant to commemorate the end of a war that was especially brutal and hard-won, the American people were highly conscious about national symbolism and left little room for nuance. There would be a hasty redesign before the coin’s initial release - with the help of George Morgan, the sword was removed and the design was adjusted. 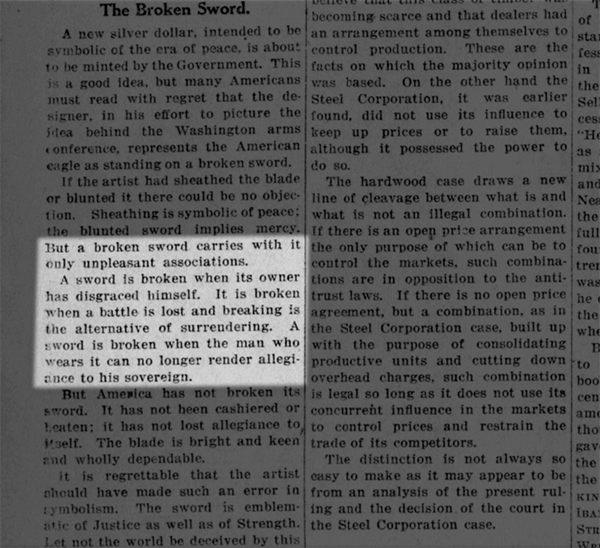 "But a broken sword carries with it only unpleasant associations…
It is broken when a battle is lost and breaking is the alternative of surrendering."

With modifications made, the new Peace Dollar put into circulation was a hit, especially in western states where paper money was used less. People saw de Francisci’s Liberty as refreshing and modern, moving even further away from the classical model than George Morgan had with his depiction. However as the initial 1921 coins were high-relief, the mint was having issues with frequently breaking dies, and bankers were having issues stacking the coins. After many attempts to adjust the relief while still keeping it high, de Francisci agreed to lower the relief significantly. Peace Dollars would continue to be minted until 1928, when the last of the Pittman Act silver ran out. They would briefly be minted again in 1934 and 1935 as a response to the Great Depression, but there was little demand for them and another silver dollar would not be introduced until the Eisenhower Dollar in 1971.

In their own ways, both the Morgan and Peace Dollars are representative of transition in their own time. The Morgan Dollar is synonymous with 19th century industry, Manifest Destiny, and America coming into her own. Post World War I, the Peace Dollar embodied this identity and elevated recognition of our place in a rapidly globalizing society. America was now not only an industrial power as it had been at the end of the century prior, but we had proven ourselves as a military and political power on the world stage. In this way, 1921 marked a shift between the old and the new - we had evolved from a promising work-in-progress to an influential and capable nation.

Last year, 2021, marked the 100th anniversary of both of these iconic coins, and to celebrate the U.S. Mint is releasing a series of commemoratives in their honor. There will be six coins total, five Morgan designs from all five historic mints and one Peace design from the Philadelphia mint. According to the U.S. Mint, “to re-create these designs for the 2021 coins, the Mint used historic assets such as coins, dies, and high resolution images to capture the artists’ original intent.” While much effort was put into making these designs as historically accurate as possible, unlike the original 1921 Peace Dollar, the commemorative will not be high relief. This is to preserve the fine details that are easily prone to wear, an issue that led to a similarly reduced relief of the design in 1922. Additionally, at 99.9% pure silver, the new coins will be a higher silver content than their predecessors, which were 90% silver and 10% copper. Lastly, NGC created a special label: The Morgan and Peace dollar 100th Anniversary Special Label (#1559) - featuring an American flag background with obverse images of both coins in the right corner. 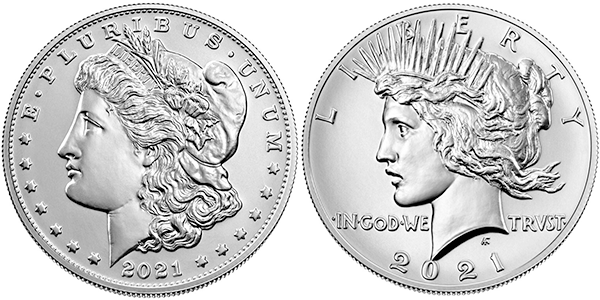 The history of these coins and what they represent are worth celebrating. A hundred years later in 2021, we were in many ways finding ourselves in a similar period of transition. Much like in the beginning of the 20th century, the first two decades of the 21st have been marked by war and upheaval, as well as innovation, great strides in science and technology, new meaning to the American identity, and a drive to look forward to what we hope will be a brighter future.